Movies influence us far more than we care to admit. Every 1980’s kids wanted to be just like Indiana Jones from “Raiders of the Lost Ark”, while kids from the ’90s were going wild for the superhuman robot from “Terminator”, followed by kids a decade later ooh-ing and aah-ing over the Dark Knight’s (Batman) swagger. From the shoe phone in “Get Smart” (2008) to the Lightbike from “Tron”, the list of wickedly cool gadgets from movies is endless. Most people would do anything to get their hands on some of these amazing little toys, but most of them are far beyond our reach.

1. Neuralyzer from the Men in Black series: This is an electro bio-mechanical neural transmitting zero synapse repositioner, more commonly referred to as a Neuralyzer, and is a top secret device used by the MiB, the fictional agents tasked with protecting the Earth from alien threats. This little gadget has the ability to completely erase the memory of anyone who sees its flash. Once people are flashed with the neuralyzer, they seem to enter a trance, freeze in place, and their eyes lose focus. Once victims are neuralyzed (i.e., wiped), the MiB agents must make up a story to fill in the information in the erased person’s mind. Its sole purpose is to maintain the secrecy of  the organization.

The neuralyzer would be basically useless on me, because I usually don’t even remember what I had for breakfast. 2. Umbrella in Kingsman: The Secret Service:

The Chestnut-Wood umbrella, used by the characters Colin Firth and Taron Egerton in the movie, is no ordinary umbrella. It looks like a basic grandfather umbrella, but in reality, it’s a pretty fabulous gadget. This umbrella is equipped with a regular gun, a stun gun (tazer), a memory eraser, is completely bullet- and weatherproof and comes with a kick-ass handle.

And here I am using an umbrella that can’t even protect me from the rain (its only job).

3. Swiss Army Knife in Get Smart: Yes, Swiss army knives do exist in real life and are extremely handy for a frequent traveller. However, this particular Swiss army knife isn’t an ordinary model. Apart from the usual tools like a cutting knife, bottle opener, cork opener, scissors, etc., it also has a flamethrower that can shoot up to six feet, a blowgun and a working crossbow.

4. DeLorean time machine from the Back to the Futureseries: 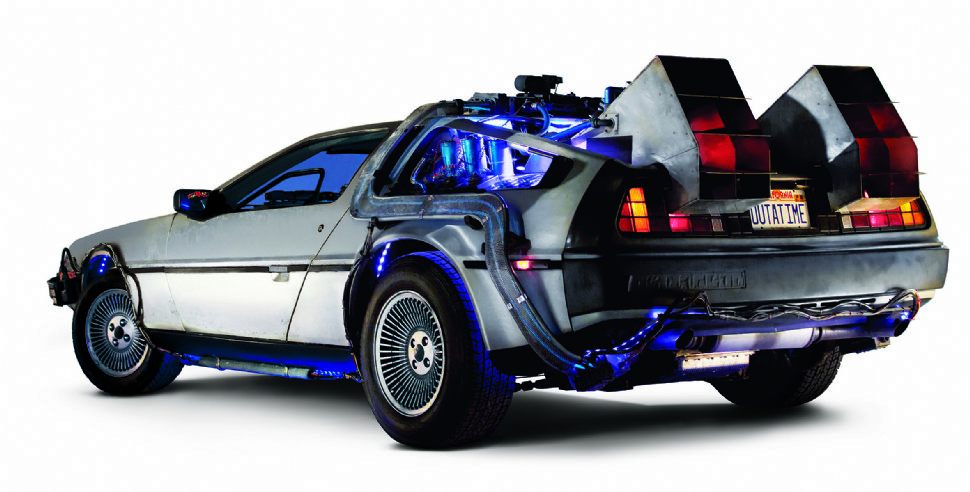 How much would you love to travel backward or forward in time, relive the most precious moments of your life, or get a glimpse of how one’s future will pan out. The DeLorean is a one-of-a-kind time machine used by Marty McFly to travel back and forth in time on his many adventures.

How the Amazing Machine Works

The operator sits inside the DeLorean and turns on the time circuits, which activates a unit that shows the destination, present date, and last-departed dates and times. After entering a target date, the operator accelerates the car to 88 miles per hour (141.6 km/h). As it accelerates, several coils around the body of the car glow white and the whole car vanishes in a flash of white light a few seconds later, leaving a pair of fire trails where the vehicle’s tires will pass after arriving at the destination time.

That all may sound simple, but you should know, a staggering 1.21 gigawatts of electricity is needed for this machine to work!

The whole procedure seems pretty complicated, but the end product is absolutely worth all the effort. Although there are plenty of DeLorean models available on the market, they don’t all come with the time travel feature. In recent years, Iron Man has become a huge worldwide brand. With the introduction of Robert Downey Jr. as the franchise’s hero, its popularity has crossed all limits. However, all the technology that is involved in making the armor is way ahead of our time.

Over the years, more than 50 suits have been featured in the comics. The latest movie, Iron Man 3, used the Mark 42, which is the 42nd installment of this amazing machine. Built by billionaire, Tony Stark, the Iron Man suit gives the wearer extreme strength, a wide array of weapons, and the ability to fly. The armor also has a humanoid computer called Jarvis, who can interpret human commands and perform functions according to Tony Stark’s instructions. The whole suit is powered by an ARC reactor embedded in Stark’s heart. The arc reactor that powers the suit.

When all is said and done, if humans are ever able to make a fully operational Iron Man suit, it would cost a fortune. For now, we’ll just have to be content flying on Jet Airways.